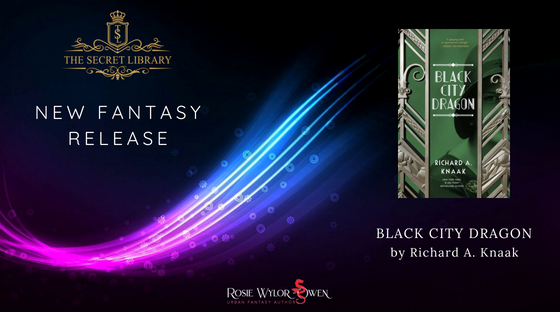 History with a touch of fantasy. This combination is so often a winner.

Richard A. Knaak’s third book in the Black City Saint series looks both sophisticated and mysterious at first glance. To be released on 13th November, this historical urban fantasy in which Earth sits side by side with an alternate world – Feirie. The blurb paints a picture of an intriguing series, and I’m really looking forward to starting it!

The Black City Saint series follows Nick Medea, a supernatural guardian of the gate between the two worlds. Black City Dragon resurrects old enemies and old love for Nick, as he protects both worlds from attack.

Black City Saint and Black City Demon, the first two books in the series are available on Amazon, and the upcoming third installment Black City Dragon is currently available for pre-order.

The paperback prices for these books are pretty high, starting at $14 and capping at $18, so the best course of action is to buy a pre-owned copy or to buy e-book copies. At the moment, Black City Dragon is not available in e-book format, but I have my fingers crossed for this format after the release.

You can follow the author, Richard A. Knaak on the Black City Saint Facebook page and his author Facebook page for updates and information about his books.

“For sixteen hundred years, Nick Medea has guarded the gate between our world and Feirie, preventing the Wyld–the darkest Feirie of all–from coming into Chicago to find human prey. But since he defeated Oberon, more and more Wyld have been slipping through. Nick and his Feirie companion, the shapeshifter, Fetch, have been busy hunting them down.

Nick keeps coming across the Dacian Draco, the sign of his ancient enemy Galerius, including a tattoo worn by a human thug. Unfortunately, every trail ends as if years old. Claryce, Nick’s reincarnated love, has narrowly escaped two attempts on her life, and when Nick sees her wearing a broach with the Draco on it, he knows they must look more deeply into her former lives.

With Wyld and gangsters wreaking havoc in Chicago, Nick and Claryce must confront the secrets of their pasts if they are to have any hope of finding out Galerius’s plans before it’s too late to stop them. Nick will need the help of all his friends, both human and Feirie, and the powers of the dragon within him, to keep Galerius from endangering the gate, Chicago, and all of humanity.”

“Knaak is a master of urban fantasy and makes good use of his historical and mythological research.” – Historical Novel Society

“Black City Saint is first-rate urban fantasy. Richard A. Knaak has mixed myth with real-world history to create a fast-paced, unpredictable story filled with intriguing characters, terrifying monsters, and sinister magic. Readers in search of the next Harry Dresden should join Nick Medea on what is sure to be the first of many adventures.” – Richard Lee Byers

*Pricing information correct at time of publication of this post.