“Adam is living the dream – literally…..

There are two worlds which have always lived alongside each other, The Waking World and the Great Dream, Reverie. Adam is living a very ordinary life until he becomes aware of the link between the worlds and discovers that, as a Daydreamer, he is one of the very few people who can travel freely between the two and achieve impossible things.

You would think that being in control of your dreams would be fun. But when both worlds are threatened by a new and growing danger and when Nightmares not only roam the dream world but also start chasing him even while he is awake, Adam realises that he will need all of his new found powers just to survive the night.

With the help of a very unusual band of friends Adam now has to save both worlds, discover more about his past and, if he can, try and avoid yet another detention.” 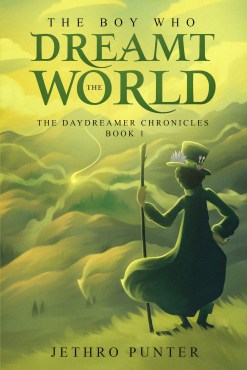 The story of Freddy Kruger meets middle grade fiction. Released May 2018, The Boy Who Dreamt the World features Adam, a Daydreamer with the power to effortlessly move between The Waking World and the Great Dream, known as Reverie. As Nightmares threaten to destroy both worlds, Adam finds he is the only one with the power to save them.

Inspired by such fantastical authors as Neil Gaiman, Terry Pratchett, Ian Rankin and Andy Stanton, the author, Jethro Punter, began making up stories for his young children. After years of developing the stories at bedtime, Punter began the challenge of turning them into a book series. The result was The Daydreamer Chronicles.

Book one in the two-books series, The Boy Who Dreamt the World is doing pretty in the book review department, with six 5* reviews on Amazon:

“I read this book in two days, a thoroughly enjoyable and absorbing read for all ages. The writer has a very good imagination with twists and turns all the way. Looking forward to the next installment. Highly recommended.” – 5* Amazon review.

“One of the best bedtime stories for a long time. An entertaining read with colourful characters, tension and humour that won’t give you nightmares. Can’t wait for the next installment.” – 5* Amazon review.

The Boy Who Dreamt the World is available on Amazon at a really reasonable 99c/99p for the e-book edition, however it’s also available in paperback new and pre-loved!

The Daydreamer Chronicles has a Facebook page to follow if you’re a fan of the series (or soon to be a fan!) and a website with all the updates on the series and the author.

Get the book reviews, new releases and book deals in your inbox every month – sign up to Rosie Wylor-Owen’s newsletter!