Ilanna, Master of the Night Guild, has waged a war for eight years to cleanse her city of the rival criminal organization that nearly destroyed it. When she uncovers a ring of slavers trafficking young girls for sexual servitude around the continent, she is forced to venture into the city of Voramis, the seat of her enemy’s power, to hunt down the true culprit and put an end to the enslavement of innocents.

But her enemies will not be so easily eliminated. She must turn to the one man certain to get the job done: the Hunter, legendary assassin of Voramis.

The Hunter willingly accepts a fortune in gold to kill one of the richest men in his city. A mansion fortress and a private army should prove no match for his inhuman abilities.

But as he stalks his target, he unmasks a bloodthirsty conspiracy in the guise of a holy mission. If he doesn’t stop the men responsible, the gruesome murders will continue and people—including those he has sworn to protect—will die.” 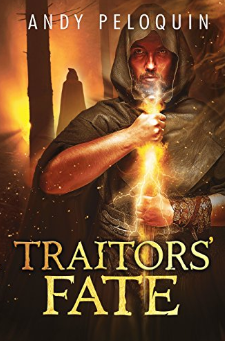 This new release feature is the first of it’s kind because it’s the first feature I have actually read and reviewed before featuring – here’s the review right here for you epic fantasy fans. How much I loved this book is the reason I wanted to feature it, and as this is the last new release feature of 2018 (*sob* – we’ll be back, I promise!), I wanted to be positive about recommending it.

Traitors’ Fate was released on February 13th 2018, and is one of my favourite books of Andy Peloquin because it’s a crossover. Featuring the protagonists of his Darkblade and Queen of Thieves series, the Hunter and Ilanna, Traitors’ Fate brings them together in an epic story. Both on the trail of a prolific murderer in the city of Praamis, when the journeys of the Hunter and Ilanna eventually overlap, they are forced to work together to figure out who this monster is. And are they mortal or demon?

Andy Peloquin’s books are hugely popular on Amazon and most only have good things to say:

“Love the book. It made my heart skip a beat but I couldn’t put it down I started early today and man oh man it is amazing book. You guys will love it like I do.” – 5 star Amazon review.

“Andy Peloquin’s Traitors’ Fate is an excellent continuation of his Night Guild trilogy and which ties it to his Bucerelli books. It can be read as part of either/both of these series or by itself. Overall, it is a fast paced read with the right mix of action, suspence, and intrigue.” – 5 star Amazon review.

“From the first page to the last you don’t want to put it down, forget cooking or cleaning, unnecessary interruptions. Can’t wait for the next installment. Andy paints a portrait so engrossing, so deep and dark you constantly are peering into the darkness looking to see where you are headed.” – 5 star Amazon review.

Even if you have never read any of Andy’s books before, you will still be able to thoroughly enjoy this story and who knows, you might have found a few more series to get addicted to. (Spoiler alert – you have!)

Traitors’ Fate is available on Amazon, and there’s plenty 5 star reviews to look at.

As I mentioned before, this is going to be the last new release feature of 2018. Christmas is coming and with lots of projects to finish before the new year arrives, now is the time for a short new release feature sabbatical. But don’t worry – new The Secret Library book reviews and Sunday articles will still be running indefinitely!