Still got that Ouija board upstairs in the attic? Let’s have a séance.

The staple of every sleepover, a séance is the coolest thing we did as teenagers. Experimenting with summoning ghosts, or demons if we were feeling really crazy, was the kind of danger we were after. Whatever we brought back from the dead, it was definitely behind the creaking floorboards and swinging lampshades.

Was it the wind? Pfft. Of course not.

So what if our séances were really real? Would our Saturday evening really be like a horror movie? Maybe. But in reality, these paranormal encounters would have loads of different ghosts. Not everyone is evil after they pass over, most of them are still going to be really freaking annoying.

These are the kind of irritating spirits we would really encounter:

With all the clingy people that have ever existed, they’ve got to be somewhere in the afterlife, right? Be warned, if we summon a clingy ghost, they won’t go away. Think it’s all over when the séance ends? Oh, no. They’re just getting started.

Prepare for months and months of being followed by a spirit who whines about the afterlife, fishes for compliments and makes you make them dinner too, even though they can’t eat it.

The only way we’re getting rid of your new best friend is Ghostbusters. So if we’re going to do séances often, we should probably keep them on speed dial. 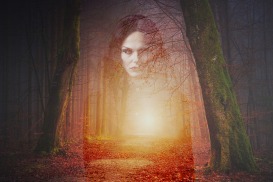 These guys probably died doing something crazy, and if they did séances, they’d probably have summoned Lucifer himself for a dare. Now they’ve passed over, they want us to do  crazy stuff just for their entertainment. If they’re the possessive demonic type, we’ll do it.

Before we know it we could be vaulting into tiger enclosures or jumping canyons on motorbikes. Worse, we might ask our teachers for extra homework, and where is our daredevil ghost when that needs doing? Not sitting at our desk working out advanced calculus, that’s for sure.

When people die and become ghosts, they can’t do much. So after death, people who used to be perfectionists have nothing better to do than perfect our lives.

“You missed a spot”, “You haven’t done the dishes” and “I can walk through walls, I know you’ve just shoved that junk in your closet” will be crooned to us in ghostly voices every darn day. So often that even we might feel like jumping off a cliff.

These ghosts probably left their apartment with a crooked picture or a dirty saucepan and now we have to fulfill them by making sure our homes are spotless. And rest assured they won’t move on until it stays that way.

So be careful when performing your séances, friends. You could be in for more of a scare than you thought!