“Fifteen-year-old Mira was one of the first to hear the native’s warning, but she would rather climb mountains than hide in the confining village. Her gift of translating for her tongue-tied sister only ties her down. Then she discovers Freko, a young griffin who saves her from falling.

Mira believes that griffins are unaware humans are more than beasts, but tension is growing. Humans are fighting back, and fatalities on both sides seem inevitable. Mira and her griffin must find a way for the two sides to communicate before they destroy each other.”

Disclaimer: I received a free copy of this book in exchange for an honest review.

Fifteen year old Mira, a Vinlander who lives with her village on the coast of an unknown, fantastical land. She is an avid climber and prefers her to climb the cliffs around her village and collect bird eggs than socialise.

Mira is a bit of a misunderstood loner but a very likable character. As she has a natural sense of adventure, we know there’s a fun story ahead. Mira cares for everyone, both human and griffin alike and she is desperate to avoid bloodshed.

People in Mira’s village have been going missing and the village folk are unsure as to why. When Mira helps the village girls herd their animals to graze, they are attacked by griffins.

Clapped in irons and dragged into the wilderness, Mira, her uncle Calder and other village members are allocated places in different griffin vales. Mira soon realises that griffins believes they are more intelligent than humans and enslave them to produce their food and to protect them from themselves.

In captivity, the griffins grant their humans supernatural abilities that they wield themselves. Mira soon learns that if a human kills a griffin, they absorb the griffin’s powers and turn “dark.” Which, for some humans, is too much temptation to resist. 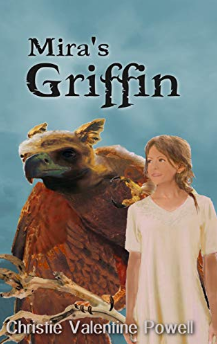 The story and world which this book is set in is amazing. Before the age of technology, Mira’s Griffin is an adventure in the midst of vibrant vales and colourful settlements.

I loved the griffin culture of superiority over humans and how, with Mira’s new telepathic abilities, they begin to learn about each other and co-operate.

The magical abilities the humans are granted are really cool. Some of them control the elements, others can speak any language and it’s a nice touch.

It felt a bit uncomfortable that slavery was shown in this way because this idea that someone SHOULD earn their freedom after having it stolen from them is a pretty awful concept.

Should I get it?

Mira’s Griffin is a fun read even with the issues mentioned, so I’d recommend it for some casual reading.

If you want to check it out, Mira’s Griffin  is available on Amazon.

Thanks for reading my review!