Disclaimer: I received a free copy of this book in exchange for an honest review. 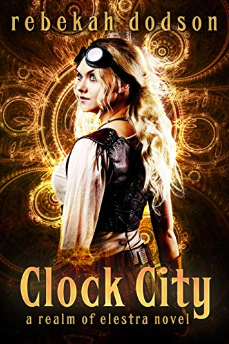 “Since Mom died and left me with my abusive, drunkard of a father I don’t have much of a life. My only sanctuary’s hidden in the woods. At least until I find a jeweled dagger and it transports me to somewhere called Elestra. I seriously can’t believe this isn’t some crazy dream, with mechanical horses, cat people, demons, and even metal dragons.

I just want to go home, but everything is a disaster in Clock City.

Who’s this mysterious girl who appeared in Elestra? Alayna wears strange clothes and keeps complaining about something called a “cell phone.” She even has a demon with her who’s sworn a life debt, and now I’m bonded to her to help save the kingdom.

I’m just Sebastian, a secret tinkerer. How am I supposed to help her, and the rebellion, save the city? My life has flipped upside down, and I don’t know if I have what it takes.

No matter what happens it’s up to us to show the world what freedom truly looks like.”

Alayna Winston, a seventeen-year-old girl from Texas. After losing her mother five years ago in a car crash, Alayna has been forced to live with her abusive, alcoholic father and scrounge for food while he drinks away his wages. Unloved by her father and her community, Alayna is very much alone, until she is unexpectedly transported to the colourful, but oppressed Clock City.

After finding an unusual dagger in the woods, Alayna is thrown into Clock City, the mechanical capital city of an unknown, alternate world. Upon arriving, she discovers that she looks just like the Queen, who has been taken ill for the past several years.

Before long, Alayna learns that all the children of the city have been forced into underground labour by the evil Time Keeper, who has the city under a magical spell. Oblivious to the poverty and slavery going on around them, the citizens of Clock City allow the Time Keeper’s evil reign to carry on, unchallenged.

After meeting Sebastian, an inventor, and Dinga, an unusual demon creature, Alayna finds that is the responsibility of her and a secret Order, to restore freedom to the city once more.

The world of Clock City is a really vivid, colourful place and with a starkly different culture. I’m a big fan of steampunk worlds and with the likes of Sebastian’s homemade “car” Delilah clunking down the street, it’s a steampunk fan’s dream.

There are some really fun characters in Clock City, like Dinga, a demonic creature who has three wives, hundreds of children (whose names he can’t remember) and a thirst for adventure. And Sebastian, who comes up with the craziest inventions and has his own magical powers. He and Alayna really have a cool “Zelda-Link” vibe going on and it’s awesome.

The crux of the adventure involves somehow getting to a giant clock face inside the castle and getting inside it, in order to bring the Time Keeper’s reign to an end. The thing is, nobody ever says why they suspect this as nobody has a clue what’s in there. But throughout the book, everyone acts like it’s definitely the answer to their problems.

Also, as the story goes on, Alayna helps out here and there but in the end she does very little to destroy the Time Keeper as Dinga and Sebastian do a lot of the work. As the heroine of the story, I expected her to have a bit more of an active role in the action.

Clock City was peppered with typos, a few too many to overlook and I think it could do with another round with the editor.

Should I get it?

It’s a super interesting read, and I recommend it, especially to steampunk lovers. Historical fantasy and time-travel fans will like this one too.

Clock City is available on Amazon in e-book and paperback formats. It’s book two in the series BUT it can read as a standalone.

Thanks for reading my review.