Title: The Tiger with a Sapphire Eye

“London 1938. Fifteen-year-old Arabella Swain and her cousin Humphrey are spending a long, hot summer under the watchful eye of their housekeeper Mrs McKay, completely unaware of the adventure and danger which await them.

Thousands of miles away, in the desert mountains, a young corporal and his captain find themselves swept up in a treacherous sandstorm. The corporal stumbles across a cave, where he finds not only shelter but a secret passageway, marking the start of a chain of events which lead him to London and Arabella’s home.

At the heart of the mystery is a statue of a tiger, discovered by the teenagers’ grandfather; a famous archaeologist, and housed in the British Museum. The statue is linked to an ancient civilisation, and a long-lost book: together, these treasures prove to be a powerful force and the race is on to find the book as a sinister secret order seeks to steal the statue and harness its powers to take control of London.

With her mother in Mesopotamia on the hunt for the book it is up to Arabella, along with Humphrey, their friend Tom and the indomitable Mrs McKay, to unravel the mystery and foil the evil plan. Bravery and cunning are key – but so is knowing who they can trust.”

Arabella Swain and her cousin Humphrey, assisted by their new friend Tom Entwistle and Humphrey’s dog Penelope. A teenager whose father has passed and whose mother is frequently away on adventures, Arabella enjoys activities most girls her age are discouraged against at the time: climbing things, tinkering with old motorbikes and playing cricket (often indoors).

Arabella and Humphrey’s grandfather discovered a statue of a tiger before his death, with a sapphire eye. When a confused corporal on the hunt for a magical book is transported from the depths of Mesopotamia into the British Museum, where the statue is kept, they believe it has more magical potential than previously understood.

With Arabella’s mother on the hunt for the book, Arabella, Humphrey and Tom find themselves trying to find out the culprits behind the disappearance of the statue and what powers these evil-doers are trying to wield with it. When they discover that the statue and the book are connected, the race is on for the right side to get possession of both.

A burglary at the British Museum, a show-down at the docks and a grand finale at an old British mansion, Arabella, Humphrey and Tom have their work cut out for them. 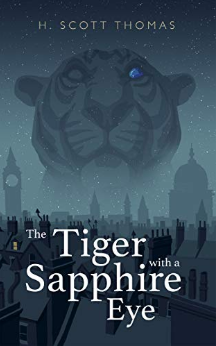 This book gave me a real throw-back vibe to the books of Enid Blyton, but with more action and magic. It’s well written, action-packed and full of history that blends well into the narrative.

The characters are great: Arabella is a fantastic strong, female lead who gets to be a kick-ass girl without drawing too much attention to the fact. Her cousin Humphrey is an over-indulged young man who experiences his own small character arc when his step-father cuts him off financially and he is forced to abandon his reliance on the family’s riches. Tom is a former London street urchin who still gets into trouble with the law more for the sake of nostalgia than anything else.

Loved the story, which had a slow start for Arabella and her friends, but was enjoyable nonetheless in the beginning and really picked up later on. The narrative in this book is the kind that touches on feelings, thoughts etc. just enough to portray it, and it’s this kind of fleeting look into the characters that got my mind engaged and pondering their mysteries.

The slow start got me wondering when things were going to pick up, but the beginning is full of low-key, whimsical fun and plants us in firmly in 1938 London. Truly, really enjoyed this book!

It’s a reasonably priced book in both formats, so don’t worry about breaking the bank with this one.

Thanks for reading my review!

4 thoughts on “#BookReview The Tiger with a Sapphire Eye”