Title: A Rhyme of Dark Words

“Tilly Hart is grieving for her mother when she moves to the ancient village of Witheridge. Finding friendship and love, she also finds a place steeped in witchlore and the legend of a beast that stalks the moor.

Supernatural events and a hidden diary lead her to a village lost in time, a place where magic exists and demons walk the lands.

With newfound friends and the deadline of Halloween drawing near, she sets out to prevent an ancient evil from destroying all she loves.

Being the hunter and hunted, she discovers she can control magic.

But magic is an addiction that can lead to evil.”

Tilly Hart has recently lost her mother in a car accident. Still grieving, she moves with her father to a big house in a little town called Witheridge, where her father is the caretaker.

I loved Tilly, even though she’s fourteen years old she keeps her emotions in check, only sometimes overreacts and generally keeps a cool head. She dwells on her sorrows and worries for a short while before pulling herself together and knuckling down to the task at hand.

Shortly after Tilly moves in, she befriends social outcasts Wilf and Becka. In a town steeped in magical history, it isn’t long before strange things start happening. Two boys go missing on the moors and a mythical witch-wolf from the area’s local legends is blamed.

Tilly’s new house also opens her eyes to the possibilities of magic. After discovering a room of the house in another dimension, Tilly befriends a ghost cat and a disembodied hand that moves of its own accord. The diary of a long-ago executed witch finds its way into her hands and not only does the town’s extensive magical history become apparent, but Tilly’s own magical abilities.

Tilly, Wilf and Becka make it their mission to unravel the mystery behind the disappearances and stop an ancient evil that threatens to plunge their whole world into darkness. 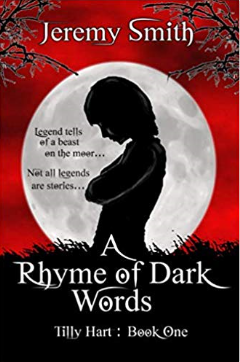 This book is super immersive when the ball gets rolling. The imagery is great and sets a dark, mysterious tone while building up to a scary but complex ending full of surprises. Each character plays an important part, which can’t be said for every book. Wilf is great comic relief, Becka brings things back down to earth and Tilly’s dad is a lovely emotional support for Tilly. It’s not difficult to see how she ended up so well adjusted.

I loved the inter-dimensional travel and the magic system in this book. Tilly picks up spells very easily but finds that magic is much stronger in the other dimension. It’s a functional magic system without being over-explained and let’s face it, who doesn’t love a coming-of-age magical discovery read?

A Rhyme of Dark Words does take quite a while to get started. I think I was about halfway through the book before I felt like things were really starting to get going. That’s not to say the first half wasn’t boring, it wasn’t, but I was really hoping for the plot to take some major leaps long before it did.

Also, when Tilly gets angry at her crush, Richard, for seeing him with another girl, she is uncharacteristically cold, abrasive and kind of rude. I understand it’s supposed to hurt when you think someone is dating your crush but the truth is, there was no intimacy between Richard and the other girl at all but Tilly jumped to this conclusion without giving it any thought at all. Plus, she was really mean to him on that basis while he was nothing but nice to her. I found this really inconsistent with her character.

The usual suspect, Amazon, in e-book and paperback. This one is actually free on KU and only 99p right now without KU, so considering the length it’s a steal. The paperback is pretty well priced too and with that gorgeous cover, I’m tempted to get one myself.

7 thoughts on “A Rhyme of Dark Words #BookReview”