For ages, I’ve wanted to order a few fandom boxes. You know, the ones you pay for monthly and you get an amazing bundle of goodies as often as you get your paycheque. Alas, London is an expensive place and they are just out of my reach. But that doesn’t mean I don’t pick up some awesome merch from time to time.

This little gem I picked up in Camden Market and it’s just beautiful. 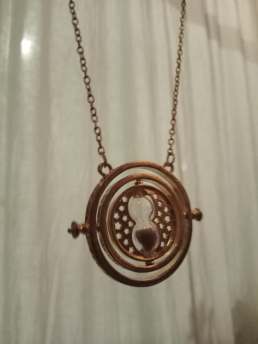 Out of all the Harry Potter merch – and you know darn well, there’s so much of it – I’ve always wanted a Time Turner. Not only are time travel books some of my favourite, but the idea of being able to turn back the clock and undo some of my past mistakes is an appealing one. Doesn’t everyone wish they could take back the time they face-planted the floor in front of everyone?

The Time Turner isn’t just a pretty piece, although it is gorgeous, it’s symbolic. For me, it reminds me that even though I wish there were some things I could change about the past, everything that has happened to me has gotten me to where I am. Better yet, it reminds me that right now is the past of the future, and my actions now determine how good my future will be. It’s a symbol of past acceptance and motivation.

If the Time Turner was actually real, I’d love to do what Hermione does with it in the books and take loads of courses a full-time job or two on the side. That way we can go to work, learn calligraphy and have a nap all at the same time. Can’t beat it!

If you’d like to know where to get these Time Turners, they are literally everywhere. Find yourself an artisan market anywhere in the world – I got mine in London but I’ve seen them as far afield as Buenos Aires – and there is a good chance there will be a Time Turner there. They’re not expensive either, I got mine for £5 in the most expensive city in the country.