I did something I don’t want to tell my husband about for a few months. Until it’s so far in the past that it doesn’t even matter anymore. As usual, it has something to do with buying books. Luckily, these books have been sent straight to my e-reader. No paper-trail.

We always take a chance when we’re buying a new book, even if it’s got lots of good reviews. So we are really jumping off a cliff blind if we buy a whole series without having read a single book by the author. Madness is what it is!

Anyway, that’s what I did, because this series looks really good plus it’s been highly recommended to another awesome book blogger noxwitchbooklife. So, all three books of the Shadowspell Academy series are now sitting on my e-reader waiting to be read: 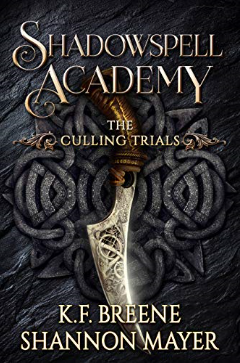 Our female protagonist takes her brother’s place at the Shadowspell Academy by pretending to be a boy. This book definitely doesn’t look like it follows the traditional academy formula, and I like it.

Following up on the first book, the female protagonist (whose name I actually still don’t know even after reading the first several pages of book one), is fighting for her right to continue to study at the academy. People’s lives are on the line.

What struck me with these books is that they actually don’t have individual titles, they’re literally called book 1, book 2 and book 3. The only thing that distinguishes these books are their covers which are be-a-utiful.

As they’ve all come recommended and frankly, I need to read more academy books as I’m writing one myself right now, I’m looking forward to binging this one. Apparently, I’m going to have to binge this series because both books 1 and 2 end on cliffhangers. Ouch. Thank goodness they were quick-released.

That’s it for the TBR pile this week. Thanks for reading!