Title: Dominion of the Star

“Almost eighteen years have passed since the Eclipse changed the Earth forever, and Sebastian Za’in rose from the chaos and seized control, imposing his order on the broken planet. In a world ruled by fear and superstition, where all gods have perished, there is no one who can stand up to Za’in, the man rumored to be one of the Nephilim—hybrid offspring of Angel and Man. In a few short months, another Eclipse will occur, and while there are those who expect a new natural disaster, Za’in has plans of his own . . .
Completely unaware of this global turmoil, Kayla Steelryn has spent most of her life in a quiet village, longing to uncover her hidden past. When she leaves her home in search of answers, she finds herself faced with the truth about her identity, forced to choose between the two men she loves, and thrust into a conflict where she alone has the power to stop an event more disastrous than the end of the world.”

Kayla Steelryn. She’s a calm, patient and good-natured young woman who is a little too trusting for her own good. While she tries to keep a clear head and analyse her circumstances without emotional bias, Kayla often finds herself following others. But not all of the people she ends up following are to be trusted.

My first impressions of Kayla was that she had clearly lead a sheltered life and knew next to nothing of the world she lived in. While she does gradually gather inner strength throughout the book, she comes across a little naïve and almost gullible. However, she learns to trust her instincts and act on them as the story goes on.

After Kayla’s parents were killed years prior, she was sent to a small village in their post-apocalyptic world that was ravaged by the events of an eclipse. Yet she has seen very little of this world from within the confines of the village and when she finally decides to leave and discover what became of her parents and the man named Asher Serafin, Kayla falls in with Jeremy and Kittie. A duo consisting of a young human born on the day of the eclipse and a curious young girl who never ages.

What Kayla doesn’t know is that Jeremy and Kittie have been tasked with retrieving her for their leader: Lord Za’in. An expert in the fields of spirituality and harnessing spiritual power, Za’in looks to Kayla to fuel his next project. As Kayla trains with him, she learns that her father was also once his student.

After understanding Za’in’s dastardly intentions, Kayla is reunited with Asher Serafin who promises to protect her in the run up to the next eclipse, when greater travesties are set to occur. 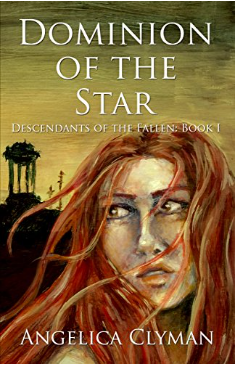 Dominion of the Star is really well written. The imagery and descriptions are detailed and incredibly poetic. The inclusion of spiritual instruments used to weaponise humans was a really neat touch and similar instruments that Kayla can use as a Nephilim are also super cool.

I loved Jeremy, Kayla’s love interest, fluctuating from bad guy to good guy as he fights Za’in’s evil influence, sometimes succumbing and other times overcoming. It made me wonder if there was going to be a happy ending or not, because the dark undertones of the book made it feel a bit like any of the characters were fair game.

Kittie was my favourite character. All her mystery and upbeat attitude as well as pro-active stance to pretty much everything makes her a character you’re happy to connect with.

Sometimes I got my wires crossed when POVs changed halfway through scenes, which did actually work it just meant being a bit confused for a line or two.

The biggest downfall for me in Dominion of the Star was the amount of time spent in visions. Due to the supernatural nature of the dystopian world, it was difficult to work out if something was a scene or a vision. As I got further towards the end of the book, more and more things were taking place in people’s heads and because of the lengthy, poetic narrative, it felt like too much time was spent in visions.

All in all, the book could probably have been shorter as there was a lot of poetic filler and lengthy monologues.

E-book and paperback formats are available on Amazon and considering the length of the novel, the prices are good.

2 thoughts on “Dominion of the Star #BookReview”