Well, all I can say is that the top four books on the Teen & Young Adult Urban Fantasy Chart are doing very well indeed. Fighting each other for top spot for the last few weeks has clearly made it a long and well-fought journey all round, with most of them knocking each other off and taking the gold at least once.

Right now, Dragonfire Academy is on the top spot now after battling its way up and maybe it’ll carry on it’s streak into next week. So, here is the next book down the charts that I haven’t already shown you and this week, it’s #5 on the charts. 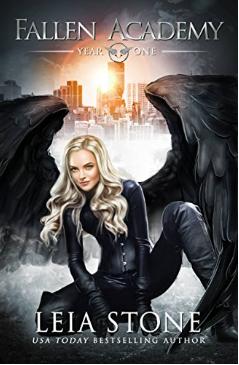 It wasn’t going to be long before we eventually got a fallen angel academy. It doesn’t matter that they’ve fallen from grace, they still have time for a structured education. Most supernatural creatures do these days.

Fallen angels always were badass and it’s not surprising that putting them into an academy based plot would lead to a bestseller status. Not that it’s a new title to author Leia Stone who has already been on the USA Today Bestseller list.

“Brielle Atwater isn’t sure of much, but she knows a few things:

1. Having black wings is not normal.
2. Selling her soul to the demons was a mistake.
3. Lincoln Grey is the biggest jerk she’s ever met … but not falling in love with him might prove impossible.

When angels fell from the sky to war with the demons that ravaged Earth, their combined powers infected humanity. Now, the humans are assigned one of two fates, being either demon gifted or angel blessed.

After wings sprout from Brielle’s back at her awakening ceremony, she’s sure she’s an angel blessed celestial. It’s not until she sees black wings that she realizes something is terribly wrong.

Having sold her contract at a young age to save her father’s life means she should be bound for Tainted Academy. That is, until a fallen angel unexpectedly fights for her to be accepted into Fallen Academy, the elite school for those that inhabit Angel City.

She’s immediately matched with her impossibly handsome celestial teacher, Lincoln Grey. Laying eyes on him, her first thought is that her time at the academy might actually be fun, but this theory quickly fades when she and Lincoln clash on day one. To further prove her admission into Fallen Academy is cursed, the entire school is thrown into chaos when an Abrus demon reveals that he knows Brielle’s secret. Now, above all else, Lincoln must fight to protect her.
To his surprise, the only thing more difficult than trying to save her … is trying not to fall for her.”

The only thing I find a bit weird about this one is that the love interest is a teacher. I always find those a little bit creepy because it insinuates an age gap that might be inappropriate. Of course, I haven’t read it so I’m not sure, but that’s the vibe I’m getting.

Fallen Academy is available in e-book, paperback and audiobook formats at fairly reasonable prices. The first in the series, there are apparently three sequels if you read it and can’t get enough.

Thanks for reading! If you haven’t seen our other #1s, check them out here.