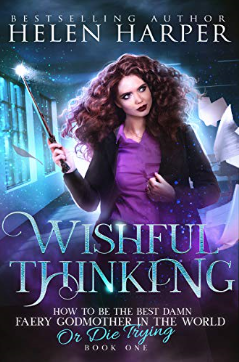 “Saffron Sawyer aspires to rise from the magical world’s bottom rung. But when her wish to join the renowned Office of Faery Godmothers is granted, bullies make her first day on the job unbearable. And to add to her misery, she discovers that someone is abducting her coworkers one-by-one.

Desperate to prevent another kidnapping, she scrambles to piece together the clues. After teaming up with the handsome and powerful Devil’s Advocate, she uncovers a strange connection between the disappearances and her lowly former gig. But when Saffron learns her promotion was only a ploy, she vows to ruin the devious plan.

Can Saffron muster enough magic to trap the villain before she’s sacked or stolen?”

I’m really wondering if this is a new sub-genre, I have never seen this kind of book before: Faery Godmother fiction! Now, this looks like an academy book but the blurb suggests that this Faery Godmother is actually diving straight into her magical job.

Of all the magical creatures and people we read about, Faery Godmothers are at the bottom of the list. It’s a cool concept, building on the Cinderella story to create an actual society of Faery Godmothers that have actual problems and hurdles to overcome. Which in itself is a bit weird, I mean what else is that wand for but to make everything better?

Is this the start of a new hot sub-genre? Who knows, literally anything could be next. I’m not-so-secretly hoping the next fad is vampire pirates. Haven’t heard of it? It’s a thing and it’s getting big!

Wishful Thinking has a fairly broad range right now, available in e-book, paperback and audiobook formats. They’re not expensive but they’re closer to expensive than cheap at the moment. Still worth a gamble if you’re looking for something you’ve never read before.