As per usual, this week we don’t have the actual #1 on top of the Teen & Young Adult Paranormal and Urban Fantasy chart because that honour continues to go to Dragonfire Academy which is really holding steady at the top. Impressively enough, it’s closely followed by Inception which has been in the top 10 for a solid month.

But #3 is sure looking good this week. 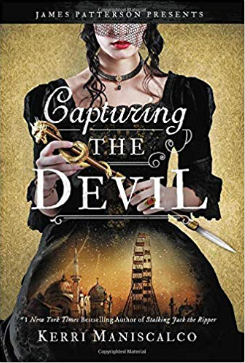 A far cry from all the academy books that are currently dominating the charts, Capturing the Devil is also topping the Teen & Young Adult 19th Century United States Historical Fiction chart. I was a bit hesitant to showcase this one for a few reasons: firstly, the blurb doesn’t indicate much, if any, supernatural/paranormal shenanigans and secondly, it’s fourth in the series.

But I dashed those concerns pretty quickly. The blurb suggests that although it’s the last book in the series, we might be able to read it as a standalone and I’m really getting some dark supernatural vibes from this whole series. Book one is all about Jack the Ripper in 19th Century London and with some magic thrown in there, that could be one hell of a read.

“Audrey Rose Wadsworth and Thomas Cresswell have landed in America, a bold, brash land unlike the genteel streets of London. But like London the city of Chicago hides its dark secrets well. When the two attend the spectacular World’s Fair, they find the once-in-a-lifetime event tainted with reports of missing people and unsolved murders.

Determined to help, Audrey Rose and Thomas begin their investigations, only to find themselves facing a serial killer unlike any they’ve encountered before. Identifying him is one thing, but capturing him — and getting dangerously lost in the infamous Murder Hotel he constructed as a terrifying torture device — is another.

Will Audrey Rose and Thomas see their last mystery to the end — together and in love — or will their fortunes finally run out when their most depraved adversary makes on final, devastating kill?”

It’s a hell of a blurb and a bit of a breath of fresh air. While I love academy books, I need a bit of variation and who knows, maybe this genre will be the next one to take off. Fingers are crossed that’s the case because historical supernatural/paranormal is even better than academy!

Capture the Devil is topping the charts in most format right now: e-book, audiobook and hardback (yasss!). Unfortunately, the prices are a little steep with the e-book going for a little over $8/£7.

Good news for UK readers though, this book is actually available in way more formats than in the USA, including paperback and audio CD. When I checked out the author’s Amazon page, there was no biography so it’s hard to say if this is because she is a UK writer or not. With no reviews on either the USA or the UK Amazon pages, this author truly is a mystery.

Thanks for reading! If you haven’t seen our other #1s yet, check them out here!