Only the daughter of a powerful Landmaster can realise his goal, but the aristocratic loner soon discovers her gift to be laced with dire consequence. As an ice-age converges and the landfolk must leave their famine-stricken homes, a terrifying new order in Farr City is hungry for the Mourde’s dark legacy.

Cullis finds himself torn between the sinister, and redemption. Blood must flow freely, as it did long ago, without limits and by the sword.”

A few people: Tianna Fell, a daughter of the aforementioned “powerful Landmaster”, Mourde Cullis who starts off as the antagonistic inventor on the hunt for power and Pultzer, formerly known as “Chimes” when he worked for Mourde Cullis. But a few others could also be considered main protagonists in this as no one character is ever focused on for very long. It’s a Game of Thrones style set-up.

The Ovus are a dangerous force in this fantastical realm and they are after ultimate power. The Landfolk and Mountain-People have always maintained a tentative alliance as the Mountain-People are dependent on Landfolk blood for sustenance.

Tianna, of the Landfolk, is kidnapped by Mourde Cullis, of the Mountain-People, as he runs tests on as many Landfolk as he can to find the Immaculate Condensive, a strain of blood hoped to bestow incredible powers.

Tianna’s blood is special and turns Mourde Cullis into a shape-shifter with access to all the previous forms of his people including the vicious Razor-cat.

When the Ovus learn that Tianna has such power in her blood, they are desperate to steal her back and take what they can for themselves. 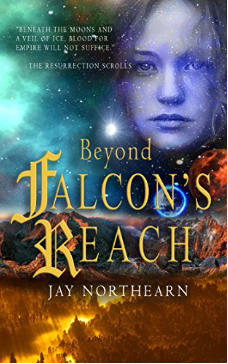 The cultures, the societies and the land have been epically designed in this book. I can’t even begin to fathom the details the author has hashed out for this story. The societies within this world were well designed and have really interesting back-stories which often intertwine in really inventive ways.

The story as a whole is an interesting one with high stakes and a multitude of hurdles. Plus, the plights of the rest of society and the small character-focused plot twists really fill out the story in a way that’s quite satisfying.

It’s a well edited book with some great dialogue.

The biggest gripe with this book was the lack of character introspection. There were lots of characters and all had interesting journeys but very rarely were their thoughts ever explained. Their primary communication to the reader was through dialogue. Because I couldn’t learn what the characters were thinking, their character development didn’t make any sense.

Cullis goes from bad guy to neutral to good guy and it’s really difficult to understand why because his thought process is barely shown.

There was also a lack of imagery. This was a fantastical world unlike our own and it was very difficult to piece together a picture of what anything looked like because of the limited description.

Lastly, much of the action was either skipped and referred to later including deaths and kidnappings. The action scenes that were depicted didn’t have a great deal of description and in some cases important moments were worded in a way that made me have to go back and read it again because I wasn’t sure if it had happened or not.

Beyond Falcon’s Reach is available in the standard e-book and paperback formats on Amazon right now and the prices are pretty good.

If you want to check out Beyond Falcon’s Reach, here’s the Amazon like a-right here.

1 thought on “#BookReview – Beyond Falcon’s Reach”