“When Lillian finds herself facing off against demons out of mythology, help comes from an unlikely source—the stone gargoyle who has been sleeping in her garden for the last twelve years.

After the battle, Lillian learns the humans she thought were her family are actually a powerful coven of witches at war with the demonic Riven. Lillian is something more than human, a Sorceress and Avatar to the gods. The gargoyle has been her protector for many lifetimes, but when she was still a child, troubles in their homeland forced him to flee with her to the human world.

But something from her childhood has followed them to this world.

In a heartbeat, her ordinary life becomes far more complicated, and if her overprotective guardian is to be believed, there’s an evil demigoddess just waiting for the chance to enslave them both.”

Lillian, who believes she is an ordinary human, but soon discovers she is much more. The memories of her life before living with her grandmother in her secluded cottage are non-existent and as far as she is concerned, she is a normal person. However, Lillian is a dryad, a magical being connected to her own tree and, as it turns out, her own gargoyle who is determined to protect her.

At home, Lillian is attacked by vampires and Rivens, who insist she comes with them. Her gargoyle springs to life to defend her and before long, her grandmother reveals to her who she really is. Her powers now unlocked and her potential realised, the magical community present in the human realm flock to her as their dreams to return to the magic realm can now be realised.

However, an evil demi-goddess from the magic realm has other plans for Lillian and her gargoyle and intends to draw them to the dark side, exploiting their feelings for each other, to add them to her ever-growing army. 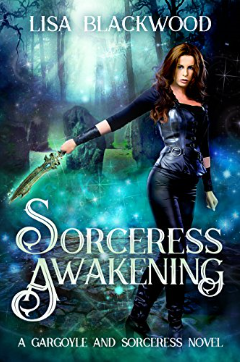 This story feels magical. I can’t actually explain how, but reading this made me feel like this could actually happen next door. The magic system was very natural, the romance tantalising and the action was immersive.

While I felt there was a lot of explaining going on, I was actually so hooked on this book. This one was a real page-turner. There are some really immersive scenes, a lot of the magical aspects of the story are inventive and unexpected and the plot twists are up there with the best.

I felt like the beginning of the book was a bit rushed. I didn’t have any time to get to know Lillian at all or really care about her as a person before the action started happening. I know you’re supposed to start a book where the action happens but it started off in a bit of a mundane scene so I was sort of expecting a little bit of an intro.

The end stakes didn’t feel that important, as Lillian’s brother Jason is used as bait to lure her by demons. But the only time we meet Jason is right at the beginning of the book, very briefly. I didn’t have any time to connect with him so although it’s supposed to be quite important that her brother has been kidnapped, neither Lillian or the reader has actually connected with Jason.

The only other thing was that Lillian’s gargoyle, Gregory, while in his gargoyle form, does behave a little bit like a dog and it makes the romance a little bit awkward at the beginning. He does have a human form and that makes things a lot less awkward but to start with I was thinking: what the hell is going on here?

On Amazon, Sorceress Awakening is available in e-book and paperback formats. The prices are a little steep right now, but it’s quite a popular book so that might be why. 300 reviews on Amazon is pretty impressive.

Here is the Amazon link for Sorceress Awakening, check it out!