Yesterday, my husband made a grave error. We were on our way to the gym when he pointed at one of the charity shops and said “Look, Rosie. Books!”

I think you can guess what happened from there: cue half an hour of combing through the limited book shelves in search of something awesome to read.

Charity shops always have a mish-mash of books and they’re usually not in the greatest shape unless they’ve been donated straight from a Christmas haul. I have actually been lucky enough to get one of those once: a hardback fantasy signed by grandparents who had gifted it only a month before. (That grandkid doesn’t know what awesome grandparents they have!)

Naturally, I found something awesome to take home with me – and for cheaper than I found it on Amazon later! 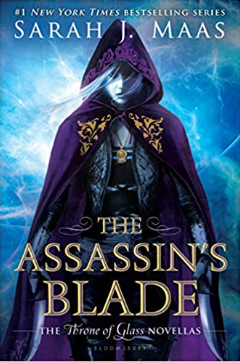 “Celaena Sardothien is Adarlan’s most feared assassin. As part of the Assassin’s Guild, she’s sworn to her master, Arobynn Hamel, yet Celaena listens to no one and trusts only her fellow killer for hire, Sam.

In these action-packed prequel novellas to Throne of Glass, Celaena embarks on five daring missions. They take her from remote islands to hostile deserts, where she fights to liberate slaves and avenge tyranny. But by acting on her own terms, will Celaena truly free herself from her master, or will she suffer an unimaginable punishment for such treachery?”

The lady who sold me this book had actually read this book, which is a prequel novella to the The Throne of Glass series, loved it. She also loved the series that follows, so I’m really hoping to get the snowball rolling into another series I’m going to love with this one.

Her recommendation was to either read The Assassin’s Blade before the main series if you want to but definitely before book 4 in The Throne of Glass series.

I’m absolutely psyched about starting The Assassin’s Blade and I sure as heck would love it to stand as an excuse to buy the series that follows.

4 thoughts on “What’s on the reading pile?”