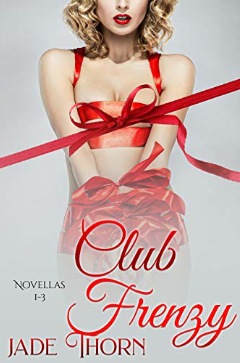 “Club Frenzy is a licensed vampire feeding bar. You can go there for the night of your life, or for the start of a new lifetime. Follow the story of three young women as they sample the wares, and as the locals sample them right back.”

Club Frenzy is a boxed set of three novellas that focus on the goings-on inside a vampire feeding club called “Frenzy.” These three stories follow Gina, Sasha and Genevieve as they explore the club and all it has to offer.

This book is very risque and there is a lot of sex. No complaints here *wink*.

Gina is recovering from a breakup and has never been to the club before but she has the night of her life with two vampire men who lavish her with love and attention. Gina’s was definitely my favourite story. After her boyfriend cheated on her, she felt worthless but her two new-found lovers turn that right around.

Sasha and Genevieve’s stories were a little more typical of paranormal romance and while they read great, they weren’t quite as satisfying for me as Gina’s. They both find the men of their dreams, though both have issues coming to terms with that reality.

The magical society and culture are well structured and the book is well written, I’d love to read more from this supernatural world. The characters are brought to life very well and even though their thoughts aren’t explored as thoroughly as perhaps they would in a novel, I was still able to get a good sense of who they were and wanted to root for them from the start. Even Genevieve who is a little harder to like on account of her hard shell and attitude. But this does stem from trauma so eventually, I ended up liking her the most.

If you’re looking for a well-written, risqué paranormal romance collection, I would definitely suggest this one!

The novellas in Club Frenzy are available individually but I recommend getting the full boxed set which you can get on Amazon here.