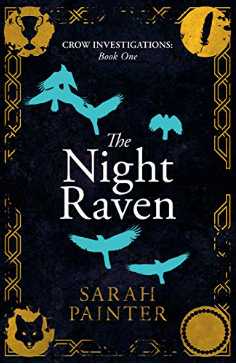 “Lydia has always known she has no power, especially next to her infamous and more-than-slightly dodgy family. Which is why she carved her own life as a private investigator far away from London.

When a professional snafu forces her home, the head of the family calls in a favour, and Lydia finds herself investigating the disappearance of her cousin, Maddie.

Soon, Lydia is neck-deep in problems: her new flatmate is a homicidal ghost, the intriguing, but forbidden, DCI Fleet is acting in a distinctly unprofessional manner, and tensions between the old magical families are rising.

The Crows used to rule the roost and rumours claim they are still the strongest.
The Silvers have a facility for lying and they run the finest law firm in London.
The Pearl family were costermongers and everybody knows that a Pearlie can sell feathers to a bird.
The Fox family… Well. The less said about the Fox family the better.

For seventy-five years, a truce between the four families has held strong, but could the disappearance of Maddie Crow be the thing to break it? “

Another five star book, what a streak I’m on right now!

This is my first time reading Sarah Painter and I had no idea what I’d be in for. This book really was a page turner.

Lydia Crow has been put on leave from her job as a private investigator thanks to an ungrateful client who is talking about repercussions for her. She decides to take up the offer of a rent-free flat from her uncle Charlie, the patriarch of the Crow organisation *ahem* family. In exchange, he wants her to do him a favour: find what happened to her missing cousin, Madeleine.

Lydia’s first impressions of her old home of Camberwell aren’t great though as a Russian hitman tries to kill her. Thankfully, her new flat is home to a ghost who is determined to make sure she doesn’t suffer his fate.

During her investigation, Lydia runs into several other magical “families” in London who the Crows keep an uneasy truce with, including Lydia’s ex-lover, Paul Fox. But as her investigation continues, she finds herself drawn to a police officer, detective Fleet, who has a magical connection of his own that she is yet to uncover.

The characters were exceptionally vivid in this book. The settings were too but I’m a bit biased there because I’m familiar with the areas of London that the story takes place in. But it’s the little details that make everything come alive that much more, the author has a real talent for making everything jump off the page.

The ending was actually thoroughly unpredictable. As Lydia uncovered more and more pieces of the puzzle, it became difficult to see how they would all fit together, but that was done with epic artistry, too. Plus, while the main plot was resolved, there are plenty of loose ends that I’m looking forward to reading about later in the series. Especially where this tentative relationship between Lydia and detective Fleet is going.

I highly recommend getting this first in the series book, which you can get here on Amazon, and has earned itself The Secret Library Book Blog Recommended Reads seal!