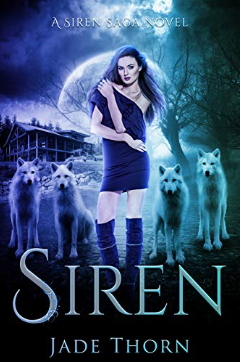 “For hundreds of years Catriona and her sisters have kept their existence a secret. The power that they hold could change the supernatural world.

One mistake during a night out on the town leaves her bound to a pack of wolf shifters, and all six of them want her. Her pheromones make their wolves wild for her and they will have her at any cost.

Now that she’s been discovered, other packs, even other races will kill to have her, to own her, to use her, to abuse her and to consume her. And all of them will hate her.

Suddenly thrust into the middle of pack politics, Catriona and her fated mates must negotiate their way forward to keep her safe, and to lead the Sirens and the Wolf Shifters forward to survival at the same time. There is a war coming, and the fate of all will depend up on them.”

I don’t think I’ve ever read a reverse harem quite as hot as this one. There is a lot of sex in this book between all genders and it’s really well written. Catriona is a cold, dominating female who has suffered the loss of her species due to inter-species wars and as a result, she and the other Sirens make sure that nobody magical knows who they are. The last thing they want is to go extinct.

Sirens require sex to feed and when Catriona stumbles across a shifter wolf one night during her hunt, she realises she has set off a chain reaction that she cannot stop. The shifter’s entire pack wants to claim her as their mate and with the chance of the pack going rogue without her, she agrees to help them.

Before she knows it, Catriona has been claimed by the entire pack and more shifters are on their way to mate with her. She soon learns she is the subject of a prophecy created by the shifter and Siren gods to help bring the wolf-shifter species back to their former glory. The alpha of the pack, Marcus, finds that his father wants to destroy his new status and pack, intending to take Catriona for himself.

Like I said, this is a hot book and the sex is gratuitous throughout. Catriona is a great, complicated character and I hope her character is explored even more in the next book. The story was fast-paced and action-packed so it was difficult to stop reading. I actually read this one in two big sittings!

The only thing that made me feel a little uncomfortable when reading Siren was the flexibility of consent. While the sex was consensual, the “claiming” or “mating” sometimes wasn’t and while this is a completely unrealistic situation in real life, it did raise the issue for me. But the good news is that this book does have warnings in the blurb. All the characters were completely untraumatized by these events in the end, but I would suggest some caution for anyone who might be triggered, just in case.

All in all this was a super hot read and full of feels and I’m looking forward to reading more about Catriona’s story as tensions rise between her new pack and the enemy, Sinclair.

If you want to check out Siren for yourself, here is the Amazon link!